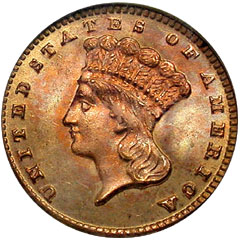 Mintage levels for the Indian Princess Gold Dollar were significant for the first few years of production at the Philadelphia Mint. The branch mints kept production low, resulting in numerous scarce issues. Following the start of the Civil War, production would take place exclusively at the Philadelphia Mint with the exception of a single issue struck in San Francisco. Although mintages would remain low for the duration of the series, these issues generally have higher survival rates resulting in continued availability for collectors.

The 1875 Indian Princess Gold Dollar (Buy on eBay) has the lowest mintage of the series and denomination. A mere 400 business strike coins produced, along with an additional 20 proof coins struck for collectors. Most business strikes have survived in uncirculated condition and display proof-like qualities, simply because the dies never had the chance to wear down. A small die characteristic in the field before the neck can be used to distinguish the proofs from the business strikes.

Due to this issue’s status as having one of the lowest mintages for any United States coin, it is popular and experiences high demand from collectors. One of the finest certified examples graded PCGS MS66 with CAC sticker sold for $109,250 at auction in February 2010.

The only San Francisco gold dollar produced after the Civil War was the 1870-S (Buy on eBay). The reason for its creation is unknown, as gold dollars were not needed in commerce at the time and no other branch mints had resumed production. The reason perhaps may have had something to do with the opening of the second San Francisco Mint building.

Various unique denominations were created at the San Francisco Mint that year including the half dime and three dollar gold piece. Perhaps the gold dollar might have been unique as well, but instead a total of 3,000 pieces were reported to have been struck. A sizable number of these have survived, even in uncirculated condition, making this issue not as scarce as the mintage might suggest. Nonetheless, it is certainly an interesting and historic coin, which came to represent the final branch mint issue for the gold dollar denomination.

The 1861-D Gold Dollar (Buy on eBay) represents the rarest issue of the series, a status which is magnified by its historical background. After the Confederate Army seized the Dahlonega Mint in April 1861, they struck an estimated 1,250 gold dollars with the remaining bullion on hand. Since production had not previously taken place during the year, this issue represents the only coin struck exclusively by the Confederacy.

Approximately 50-60 pieces are still in existence across all grades. Most of these are graded in AU, indicating they were hoarded soon after their mintage. Production-quality was low, and most survivors show various problems such as weak strikes and irregular planchets.

One of the finest known examples graded NGC MS 65 from the Duke’s Creek collection sold for $149,500 at an auction held in January 2008.

The 1855-D Indian Princess Gold Dollar (Buy on eBay) represents one of the rarest coins for both the series and denomination. The original mintage at Dahlonega was 1,811 pieces, of which fewer than 100 examples are believed to have survived.

Striking is a major problem with this issue and nearly all known survivors display weakness on the central portion of the reverse. This impacts the appearance of the date, which is not complete on most coins. A mere four coins are known to exist in uncirculated condition, and two of these do not display a full date.

The absolute finest known specimen is from the Duke’s Creek Collection and features a sharp strike and excellent luster. The piece was graded NGC MS 64+ with CAC sticker and sold for $155,250 at auction in August 2011. 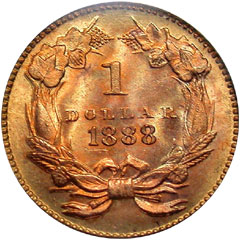 In general, the issues of the issues of the series struck at the Philadelphia and San Francisco Mints have the highest production quality, although weak strikes still sometimes occurred. The issues produced at the Charlotte and Dahlonega Mints are generally weakly struck, sometimes with planchet problems, and may lack eye appeal. The quality from the New Orleans Mint depends on the issue. Many coins are prone to have been dipped or cleaned, and original, problem-free coins are very scarce to rare for most of the early dates. Proofs often display hairlines which limits the grade.

Type collectors will often be satisfied with a single example of a later date of the series. Some of these have survived in extremely high grade, including some pieces certified as MS-68 or MS-69. A relatively high proportion of the coins struck in the 1880s have survived, and mintage usually is not a direct indication of rarity.

View All My Coin Guides Sites →